I thought I would mention the machair at Calgary today.  For those of you who don't know Mull, Calgary is beautiful white sand beach, with an area beside it of grassland which is usually heavily cropped by sheep and rabbits.  You may or may not know it is actually an SSSI.  A Site of Special Scientific Interest.  Because it is 'Machair'.  A shellsand grassland habitat found only on the west coast of Ireland and Scotland.   It belongs to the Council, who have not managed the grazing in any way for as long as anyone can remember.

Friends of Calgary Bay is a local group formed a good few years ago with the aim of looking after the beach and the machair.   They regularly hold beach cleans and keep a close eye on whats happening in the bay.  Last winter several meetings were held and the community consulted to make an action plan for gentle but important improvements to the bay.  There are issues with parking on hot summers days when everyone wants to be at the beach.  There are issues with the grazing on the machair - no fences = no control.  There are issues with the public loos and with too many folk cramming onto the camping area.   Difficult things for a small voluntary group to fix in a hurry.

The group realised there was one thing that was within relatively easy reach of being able to improve and with the help of the local farmer, a plan was made to fence the machair so sheep could be excluded during the summer flower season.  The Council agreed to lease the land to the community group but they could not pay for the fencing.  A Facebook and Twitter campaign was begun, and the money required to pay for the fencing was raised in a matter of weeks.

Yesterday the fencing was finished, and the gates hung.  Now we will be able to see what grows!

Friends of Calgary Bay could not have done this without the willingness of the farmer to remove his sheep during the main flower growing season.  They couldn't have done it without the support of the wider community who donated the funds to pay for the work to be done!

Now we need to create a miracle to do something about the toilet block which is certainly not fit for purpose.

The fence looks really good, it is hardly noticeable from the beach side, and makes sense from the road side.  Hopefully it will help protect the machair from the seaward side, and hopefully visitors to the area will treat it with respect and use the access gates! 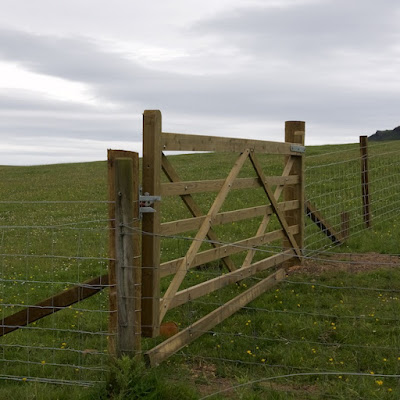 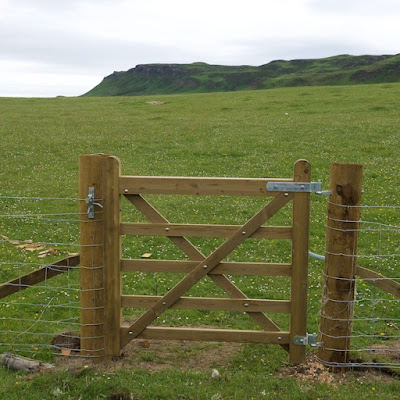 This area is badly eroded and always difficult when you see children sliding down it, particularly when the Sand martins are nesting.  Now the fence will hopefully protect it.  Maram grasses have been planted to help stabilise it. 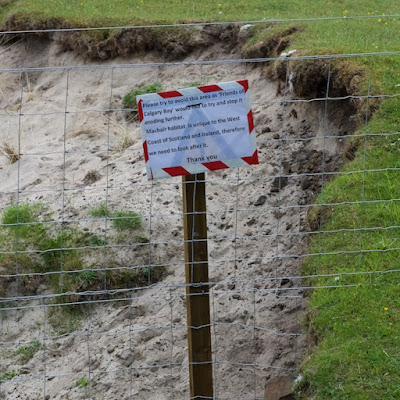 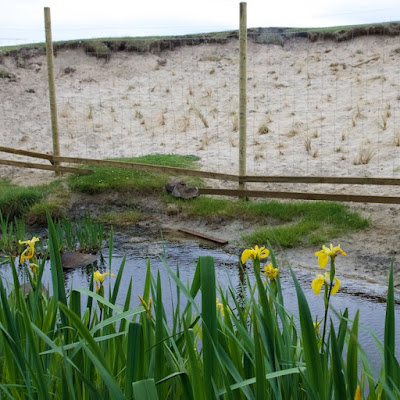 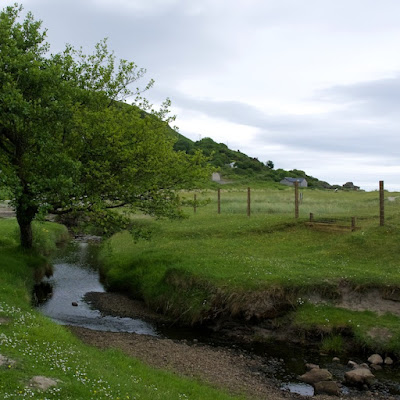 All in all, it will be exciting to watch the machair develop!  Watch out for more photos later in the month! 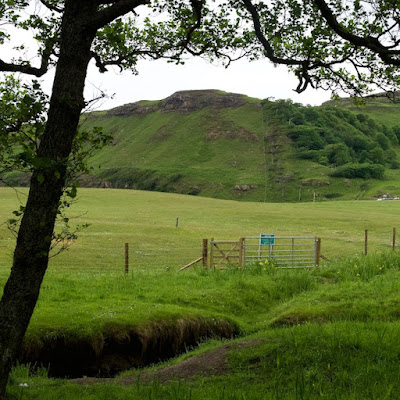 The fence line is well hidden in the maram grass on the beach side. 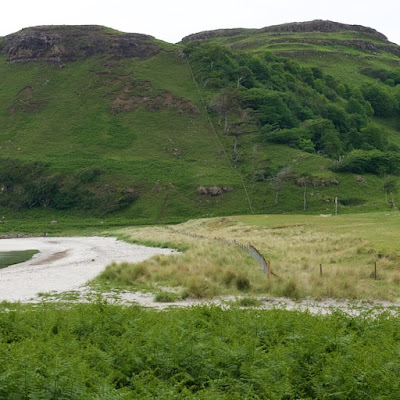 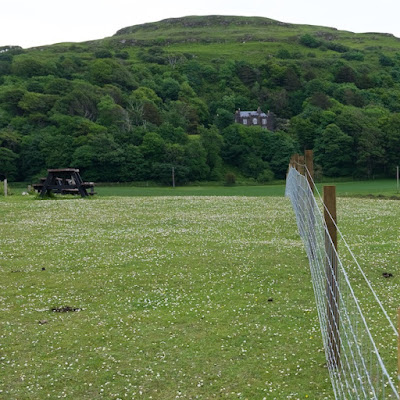 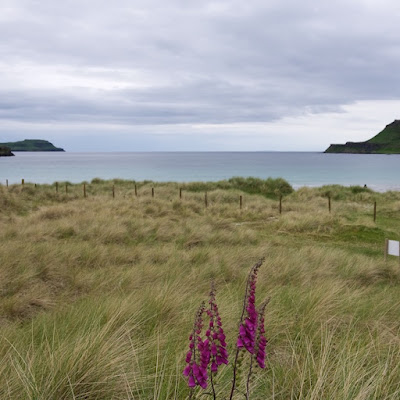 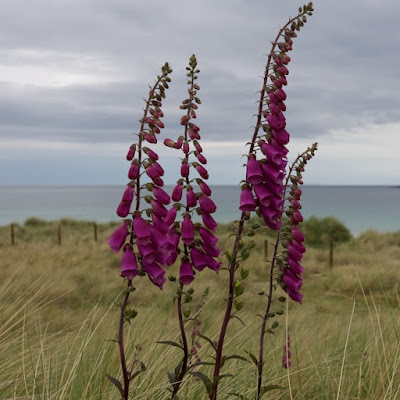 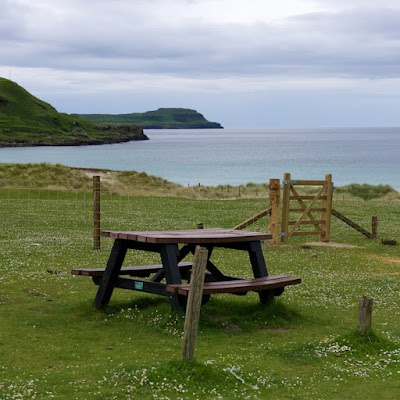 Farmer and I had to go to Tobermory today so we took a couple of old TVs that we could not recycle in Castaways to the dump, and an old oven, that we had bought a few years ago second hand.  It always feels so wasteful.

It was cheering to see a bit of wildlife on the roof of the recycling shed - so many gulls! And so noisy!  Plus a bank of wild Field daisies flowering wildly. 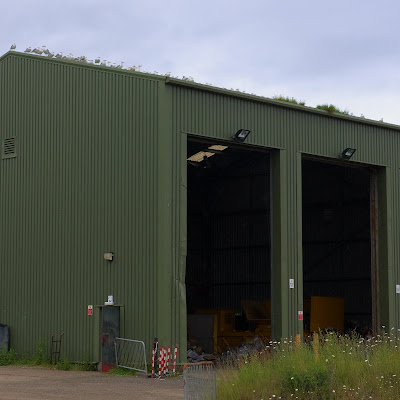 This stone dyke is near Calgary and has a wonderful fringe of Ferns growing along it. 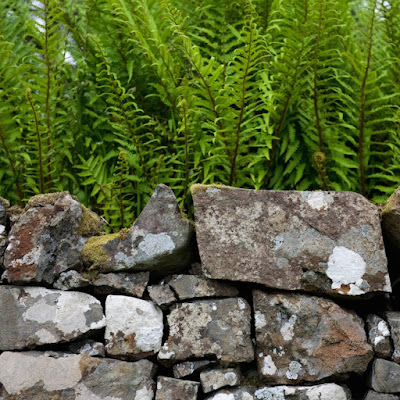 Not so wonderful is the highly invasive Bracken growing at its feet. 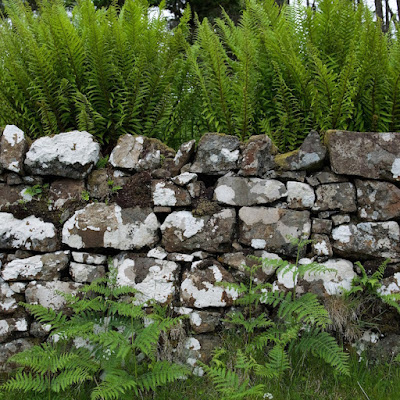 And coming up the track on my way home today, the clump of Common spotted orchids growing beside the Nissen shed.  Always a joy to see. 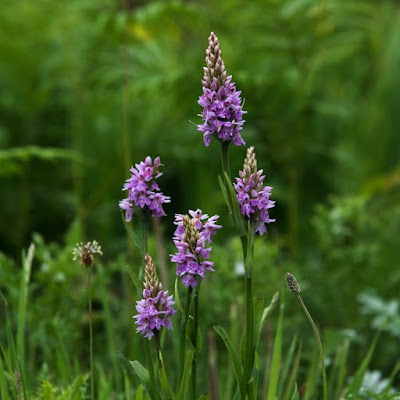