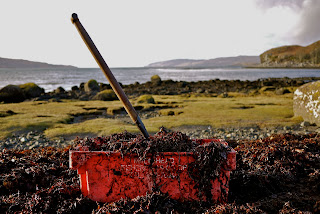 After winter storms, rich pickings are found on nearby beaches. We help collect rotting seaweed for the local eco school, carrying it in recycled cattle tubs and fish-boxes found on earlier beach-combing forays. And more, we take home to fertilise our own vegetable garden. 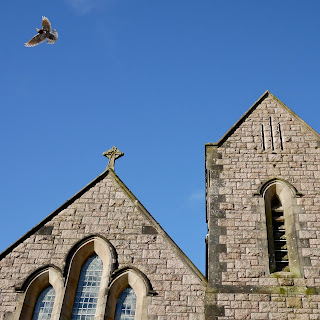 Fly by church on Tobermory sea front. Today arctic winds bring cold bright weather with brilliant blue skies followed by intense but fast moving showers of hail or snow.
A shower of hail starts out on Rum this morning, coming our way, as the first rays at sunrise came over Ensay Hill. Watched the shower tip out of rotund puffball clouds above Rum's shivering peaks tinged pink as it moved across steely grey sea, reflecting pale warm hues on the water as it moved. Lost sight of, first, Caliach Point and then, Calgary Point as the storm approached. A silent fog of hail. And as quickly as it came it cleared leaving behind a thin white veil on the ground.
Posted by Treshnish at 30.1.10 Links to this post

Sheep and their dogs

Most of the farms on the Isle of Mull are stock farms. There is very little arable land. The type of land - from sea level up to rugged mountain top lends itself well to extensive mainly outdoor livestock farming. And any farmer with sheep (blackface or otherwise) will be tackling, on a daily basis, the same kind of activities as we do at this time of year - and more. There is always something needing to be done. Routine seasonal treatments. Routine checks out on the hill. Routine winter feeding.

Dog on tractor.
This week Farmer treated the rest of our hill ewes and when they were all done, he let them back to the hill. 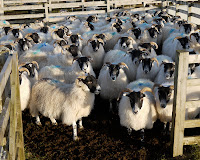 A pen of hill ewes wait to go through the fank.
Once through the deer proof gate that divides the hill from the in-bye, they slowly and gradually make their way back to the part of the hill they are 'hefted' to. Some live at Crackaig, some on the Sitheans, others along the dramatic shore line - it depends where they were born or where their mothers were born. They have their routines too - one group of ewes, the ones who live on the Sitheans, they come every afternoon to the gate above the Treshnish steading to see if Farmer has opened the gate to let them in and graze the bit of grazing between the 'natural regen' woodland along side the farm track and the farmyard.

Tig and Cap watch what is going on in the fank.
These dogs do a lot of watching. The hole in the wall of the 'fank kennel' was made by Cap (pictured, right) last spring when he decided he didn't want to be left behind one day, and he tried to eat his way out. Thankfully we realised what he was up to before he succeeded.

Hoggs at the troughs in the Haunn field.
Spread out and grazing quietly in the open grassy field surrounding the Haunn cottages are the hoggs. Two jagged lines of troughs are laid out at random, enough for 140 mouths to eat at one time. The January sun has not yet risen above the hill and a cold shadowy air lingers. No wind blows and the sounds of the visually calm sea and its gentle waves crashing on the cliff ledges below the Point are surprisingly loud in the quiet of the still morning light.
At the first distant sound of the quad, the animals slowly and quietly begin to move. As the engine noise gets louder, one or two hungry hoggs start bleating and once the quad appears they begin to run from all corners of the field. By the time Farmer starts emptying last nights rain from the troughs, with todays bag of food on his shoulder, he is being gently mobbed. The dogs watch from the sidelines. The bag is opened, the feed is trailed into each trough, the cries are silenced as they eat - and as they finish, they slowly drift off and back into the far corners of the wide open field leaving the zig zag trough lines as deserted as they were before.
Posted by Treshnish at 24.1.10 Links to this post

Into a new chapter 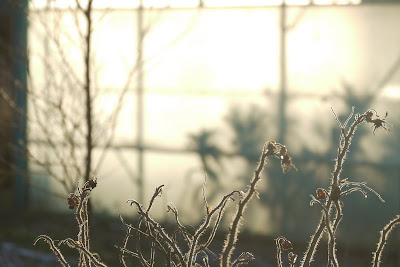 A January afternoon ray of sunshine coming through the 'polytunnel' in the Treshnish Farm vegetable garden with spiky rugosa hedging in the foreground. Our veg garden has, (in my biased opinion) the most fantastic view over the stone dyke to the sea - Shian and Duill holiday cottages have the same open outlook over to the Island of Coll and beyond.
Sheep work begins again! Six weeks after the tups go out with the ewes, the entire flock is usually brought in, put through the fank, counted and the tups taken out. The tups will spend the rest of the year separate from the ewes. This season, because of the recent extreme weather the tups stayed in longer. The yard and fank were sheet ice until two days ago, so yesterday Farmer did some long awaited sheep work - starting with the in-bye ewes who all received a Cobalt Selenium supplement (we know from soil testing that our ground is deficient in these minerals) and a routine fluke treatment.
And the cattle receive new levels of attention too. The twelve heavily pregnant cows are back inside, enjoying shelter from the storm, in the cattle shed. We usually bring them in before Christmas before they start 'poaching' the ground too badly. Poaching refers to the often deep dents left in the ground by the cattle as their feet sink in to the soft ground underfoot. This can scar the landscape and is difficult to remedy afterwards in an non-intensive way. So we try to avoid them making the mess in the first place by 'bringing them in'.
This winter the cold weather has enabled them to be outdoors a month longer than usual. Luckily for us, on this north west corner of the Isle of Mull, the snow thawed quickly and our stock were able to graze the roughage in several fields deliberately left as a growing 'hay barn' for winter. This has saved us about alot of silage and several big bales of bedding straw. But now, due to start calving in about 2 weeks time, it is great to know they are indoors and easily accessible for calving time. 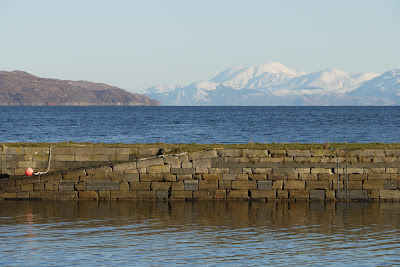 Looking up Loch Linnhe from Craignure at snow covered Ben Nevis last Friday afternoon. This photograph doesn't really do the scene justice. It was one of those memorable days - a perfect winter's day on Mull.

The Deep Freeze and Sunshine 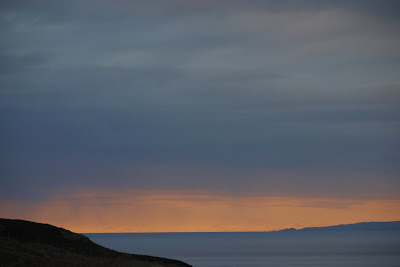 Looking over from Treshnish to Tiree.
Treshnish hills and fields are back to their usual winter plumage - a range of reds, browns and oranges, with faded greens and pale dying grassy threads. There is still ice everywhere, snow in tiny sheltered places where the sun cannot reach. It is very cold, and the road from Ensay to Kilninian is still impassable. (Impassable, or should I say impossible, roads on the Isle of Mull have been making the news this week.) 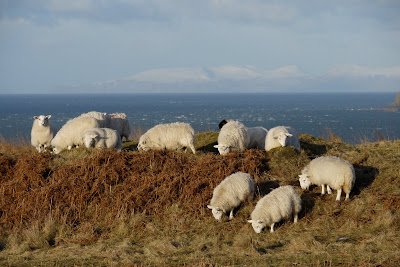 Some of those delightful Cheviot hoggs, with snow covered Rum in the background. Our stock are all safely grazing the in-bye grassland so we do not have the concerns that many farmers do, where their animals are out in deep snow. And looking over a frozen wetland area to the other side of Calgary Bay. The sun is warm but the ground underfoot is still rock hard.
Posted by Treshnish at 7.1.10 Links to this post

Once in a Blue Moon 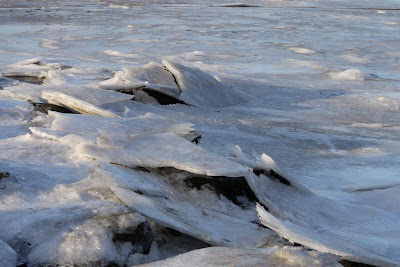 Ice on Loch Cuin at Dervaig on Hogmonay. The courageous driver of the gritting lorry made it as far as the quarry above our turning on Wednesday, so we were able to get out to Dervaig before the shops shut for New Year!
Hogmonay Eve brought a blue moon and a partial lunar eclipse. Seemed like an auspicious signal for the end of the year and of the decade. It was bright and starry - except when I got the camera out to photograph it, a cloud appeared out of nowhere and obscured the shadow on the moon! 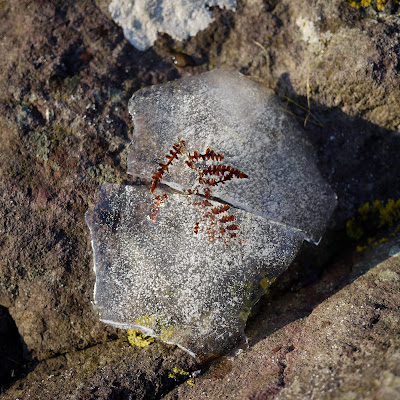 The shortest day is now nearly 2 weeks behind us. This prolonged cold spell brings the bonus of sunshine and brilliant blue skies, and clear starry nights. Crunchy iced snow underfoot makes walking on the hill a magical experience. Frozen burns and bog, cascades of thick creamy grey ice tumbling down rock. Red spongy mosses forming hard clumps of colour capped with ice. Sheltered spots with tell tale signs of where deer have been lying, scrubby trees with damaged trunks from stags rubbing them.
We walked up to first foot our neighbours yesterday afternoon. A foursome of brightly breasted bullfinches danced along in front of us as we went along the farm track towards Ensay, dropping onto deer posts, then moving off just as we got close enough for a really good look, and then they did it all over again, and again until we parted company at the edge of the birch woodland. We followed along side the road up the hill towards their house, across the Ensay Bridge, thick thick ice still covering the road. As we neared the house a pair of golden eagles floated slowly overhead.
And as the sun was setting and we started to walk home, the hill glowing softly pink in the sunset light, a Sea Eagle flew eastwards from the Crackaig direction, low and sharply silhouetted against the fading sky. And on the Sitheans, the grassy 'fairy knolls', we found the sad remains of a red grouse. Covies of grouse on the hill are one of our favourite sightings during the year, and getting rarer. 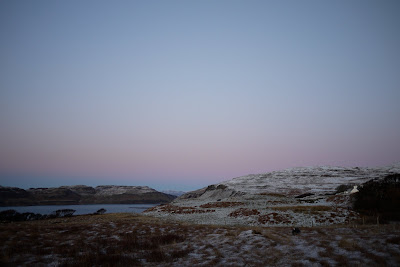 Duill, one of the Treshnish Cottages, looking towards Calgary in sunset light January 2010.
Posted by Treshnish at 3.1.10 Links to this post