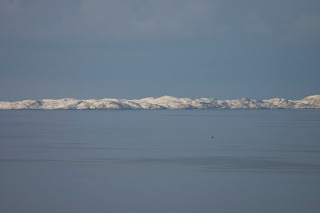 It is not often we can remember seeing Coll covered in snow, or Tiree for that matter. And not hanging onto the snow for so long.
Moonlight path across the sky bright line across the sea, between here and Arinagour. Early morning slight cloud obscuring the lunar eclipse but we did see part of it redden through the cloud. Farmer was further west out feeding the cows and he saw the full red disc. 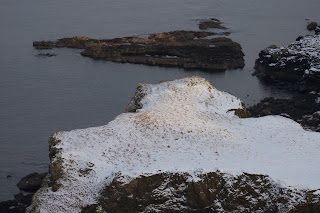 All the cliches about sparkling snow, crunching underfoot. White fields lit up in the moon light. It is all true. It is all very beautiful but alot of extra hard work for the Farmer, making sure the animals are all okay, that there is water in the cattle building - still relying on the old tubs and large buckets to carry it in.
We spent an enjoyable few hours yesterday out on the Point wandering quietly around checking that the ewes and the tups were okay. This golden eagle sat on a rock and allowed me to get about 40 feet away before lifting off and flying past, only to drop down and sit on a more distant rock in the Haunn field. 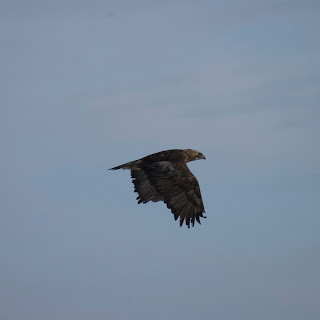 It is important when there is snow on the ground to ensure the sheep have enough fodder. In the early stages of pregnancy the ewes can re-absorb the tiny foetus if the nutrition is not right, so it is important to make sure they are not too densely stocked if they are in the fields. The Point is actually quite a large area so gates already open in to the neighbouring fields they have alot of space. We watched Cheviot hoggs digging with their feet through the snow to get at the grass underneath in a field near us. On the Point there are alot of tufts poking through the snow and it would be easy to imagine that there was enough to keep them going, but Farmer decided to make sure they really do have enough and took out some hay. The bales are quite large, they make the tractor look pretty small. 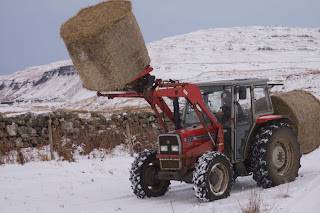 Ulva School was closed Friday and Monday because of the snow - no one could get there, so the Christmas holidays have started early and the Parent Council meetings about the school closures are taking a break until the New Year. 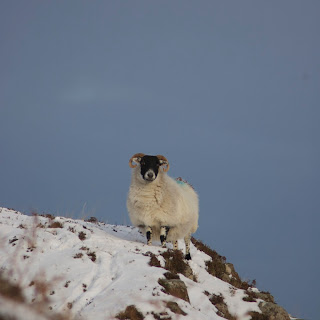 The tracks of the hares in the snow have been amazing to see. Their 'footprint' so much larger than a rabbit, and there have been hare tracks around Shian and Duill, as well as across the Haunn field. And there is no hiding the tracks of a stag who has got into the natural re-generation woodland by the Ensay Burn. Huge hoof prints. 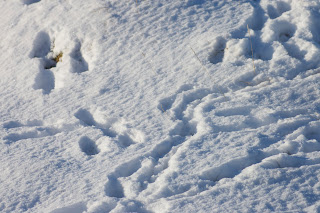 We wish you a Happy Christmas and a Healthy New Year.
Posted by Treshnish at 21.12.10 Links to this post 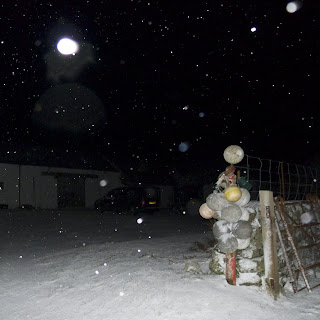 Whilst the rest of the country suffered the snows over the last few weeks, we escaped it all. So there was a little gentle excitement in this snowball loving household when it started to snow yesterday afternoon as it was getting dark.
During the evening, the wind got up and we had some impressive blasts before I fell asleep, with hail stones being hurled against the windows, sounding more like rapidly fired pebbles than hail. It never ceases to amaze me that during a gale we can feel the floors upstairs move in the wind - in a house with 2 foot thick walls. Good job we are sorting out the draughts and replacing dodgy windows in the New Year.
Daylight reveals the usual smattering of snow at Treshnish compared to heavier falls elsewhere but some great vertical accumulations up the windows of the house. (On Christmas Day morning 1995 we woke up and looked out of the north facing windows of the house to a total whiteout, and thinking it was foggy, Farmer opened the window and a wall of snow tumbled in to the room.)
School has been cancelled today, and therefore the Christmas party this evening. School closures meetings etc have kept me from the camera so not many pics on this posting. Morale fluctuates from high to low. Mike Russell (the Education Minister) visited the school on Monday. Pupils interviewed him as part of a project they are doing about the World of Work. His visit was a high point in amongst the lows, as he is a charismatic man and made us all feel more positive.
The metre long bird feeder was at a jaunty angle this morning blown sideways by the wind. Over the last week or so we have had a few extra visitors - two cock pheasants and a small flock of starlings. The two pheasants try and chase off the smaller birds on the ground - generally unsuccessfully, but the starlings are tending to dominate the feeders which is difficult for the other regulars who are not getting their fair share. 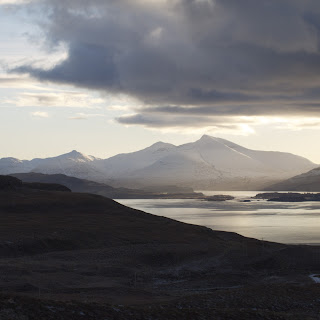 One of the main jobs at this time of year is ensuring that the nutrition of the animals is kept at the right level. Whilst there is plenty of foggage (grass left standing) in the fields and on the hill, it is of a much lower nutritional value than in the summer. The cows are on the hill at the moment and have been grazing right out away from their morning feed area - ranging the hill, and last night they will have gone to the south side of the hill to find shelter from the cold north blasts. So Farmer has to wait for them to come back to the troughs - if he goes at first light, they are nowhere to be seen.
The ewes are still with the tups in the fields, so if the snow stays it is easy to get supplementary feed to them. The hoggs are indoors in the cattle shed enjoying the kinder option. And Farmer is enjoying not having to pull them out from the brambles.
West and East have new wood burning stoves so they will be cosy for our Christmas guests. Perhaps we should move down there ourselves as the Farmhouse is still without central heating.
That is the snow on again - completely white out there now.
Posted by Treshnish at 17.12.10 Links to this post 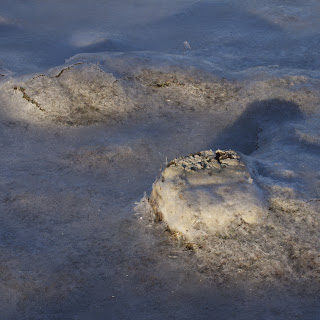 The last 4 tups went out yesterday. Tupping started 3 weeks ago and the ewes will stay in the fields for another 3 weeks - grazing tools, cleaning up the pasture after the cows. We had a bit of hail before dark, which is still lying, this morning, on the frozen ground. We have been lucky that there has been no snow here, so we have not had the problems associated with hill sheep or cattle wintering outside and heavy snow. I read the Tarset Shepherd's harrowing tale of getting animals safely off the hill, and realised how very lucky we have been to escape the weather that the rest of the country have had. 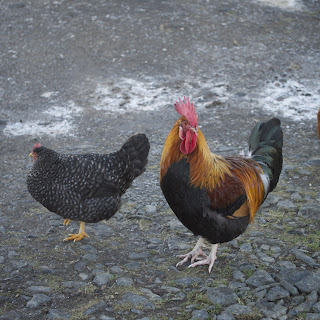 The Council have closed the Hill Road from Torloisk to Dervaig and the Glen Road from Aros Bridge to Dervaig. We have been quite surprised that they have intermittently gritted the road from Calgary to Torloisk which is usually the last one to receive any attention. We must not complain though as it keeps access to Treshnish open.
The school fight continues... we were due a visit from the Councillor/Spokesperson for Transport on Tuesday. He was going to sit in on a 'real time' school run to verify the actual journey time (as opposed to timing it in a Ford Fiesta, which is what the Council staff did for the Proposal papers). Much of Monday was spent on the phone discussing whether or not the 'run' should go ahead - and why? Because the road was so treacherous. It was cancelled. 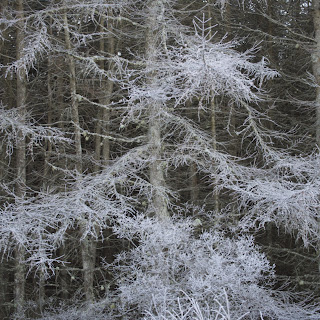 Panic in Tobermory because the shelves in the Co-op are emptying fast, and the lorry didn't come yesterday and won't come today either. 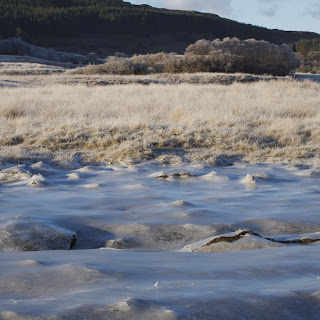 Light relief. Stopped to take photographs on my way to Dervaig yesterday. Thin ice on Loch Cuin, up to the high tide mark. Silent still air. Cockerel crowing at Shepherd's Cottage. High pitched cracking from splitting sheets of ice as the tide slowly withdrew out to sea, leaving the curled up over rock paper thin ice high and dry.
Posted by Treshnish at 8.12.10 Links to this post 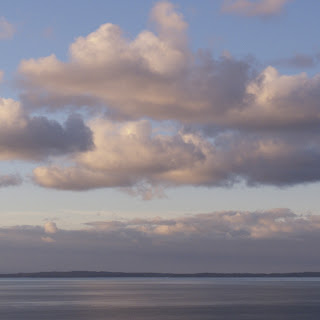 It has been a cold and dry week here at Treshnish. We have escaped the snow, but it has been colder here than any early winter we can remember. Mostly bright and clear days. 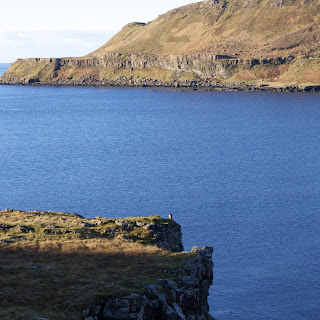 Farmer has been on wood and water duty all week. We had frozen pipes to the cattle building, and several cottages ran dry too. A break in the weather meant the wood chip was delivered yesterday afternoon. 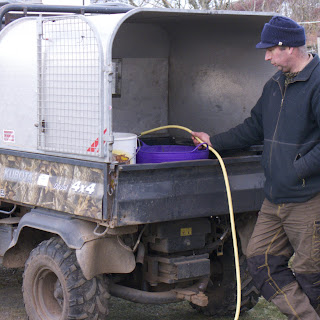 Water had to be carried up to the troughs for the bull and the hoggs in the cattle shed. 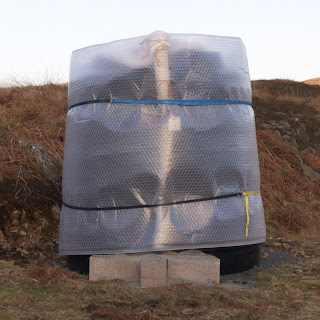 And the Treshnish water tank had to be bubble wrapped as we have not built an insulated shed round the new tank yet.
Posted by Treshnish at 3.12.10 Links to this post