I have finally got our internet connection sorted.  Farmer had spent some time balancing on the forks of the tractor raised over the old porch roof, to fit the new dish to the wall. He did that weeks ago. Then I finally plucked up courage to connect up the laptop and try and make sense of the very faded photocopied instructions that came as part of the Home Install Kit.  With a sophisticated message system between myself in the kitchen, Daughter outside the open kitchen window and Farmer balancing above the roof with a sledgehammer screwdriver, we managed to point the dish in exactly the right direction to maximise connection to Ka-sat.  Success - or so I thought.

Suddenly the many internet connecting devices in the house started coming up with error messages and not connecting without a lot of irritating intervention.  Days passed.  Not surprisingly it didn't get any better.  In fact with the strong easterly winds it got worse.  We had been promised 18mb/s (10 x better than existing) but it didn't seem any faster - if anything a lot slower and more unstable.

There hasn't been much time to look into it this last week, and I kept hoping it would get better all by itself.  But this morning I couldn't even load a page, it was like having dial up again.  Then the penny dropped.  We had had a warning email from Q-sat, our original provider, saying we were about to exceed our monthly usage. I was a little surprised because we were on a new satellite.. but I looked at their stats page this morning and saw that we had now used 100% - even though we were on the new satellite.  Or were we?

Imagine my embarrassment and relief, after 9 days of difficulties and not being impressed by the new connection, to discover that I had mis-wired the router, and that we had still been using the old slower satellite connection...

It has been a doubly good morning as Farmer had to calve a cow with a calf that was breached.   Thankfully the calving jack came into use for the first time and he was able to calve her, swiftly and without too much distress for the cow and calf.  The calf is now up and suckling.

The hens were really struggling in the high winds but they are laying lots of eggs which is great and we will have some in time for Easter week guests arriving this weekend.

The larches in the Langamull forest are much further on than the ones here because we are so much more exposed. 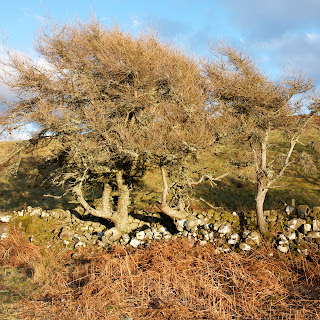 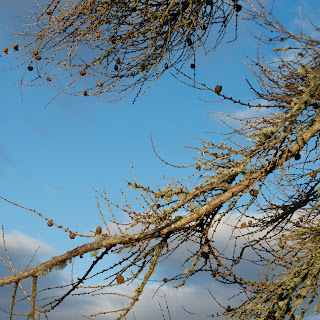 The team has been working hard.  Only Shian and Duill to finish now. Bathroom paint in Duill drying as I write and Shian last minute touches will be finished by tonight.  I hope to photograph them tomorrow! In the meantime here are some photographs from Studio and Toechtamhor. It will be interesting to compare the energy consumption on both cottages - before and after their eco-improvements.

Farmer has been on sheep work again this week.   Gathering on Monday and in the fank on Tuesday.   John, who helped gather and in the fank, said he had never seen the hill so dry. There is such a risk from accidental grass fires now.
Posted by Treshnish at 27.3.13 Links to this post

Just learned to use caption text

It still hasn't rained!  In fact when Amy, in the trusty Royal Mail van, drives along the track a cloud of billowing dust chases behind her.  It is very, very cold and the wind is blowing ferociously tonight - a good test for our new (and slightly exposed to the wind) satellite dish for the internet...

Preparations in the cottages are going well. Andrew came to fit the new door on Toechtamhor, Ian came to fit the 2 new heaters there as well.  Studio is being put back together and feels so homely.  Farmer had to remove the old windows from T'mhor and the garden looks far less like a building site now. They were seriously heavy. Neil continues to work his way down a seemingly endless list of bits and bobs.  We are so grateful for all the help we get, and hoping to see the other Neil very soon too - to move a thermostat in Studio.

We saw the aurora borealis. Everyone had gone to bed so I called them out to see it. It was very beautiful. I took some shaky photographs and as a consequence I am determined to get better at night shots.

A bitter blow last night as it was beginning to get dark. Farmer went to do a routine check on our water supply as it has been so dry (Yes it is March!).  He found a dead tup which had hanged itself (I think) accidentally by getting a horn stuck in branches.  Farmer asked me to be his eyes as he used the tractor to raise the dead tup up out of the gully.  I was grateful it could be done by machine.  The tup is now buried, as per regulations, and his death recorded with his individual ear tag number.


Farmer has one of the in bye ewes in the shed just now.  She is not well.  He drove down to the vets this evening to get her some multi-vitamins and the sheep equivalent of an energy drink.  It may be twin lamb disease though she gets supplementary feeding like the rest of her flock so it is unlikely to be that. Jamie came over to help Farmer today. They put the in bye ewes through the fank.  They get a dab of red keel on their backs to mark that they have been through the fank today, as well as a line of blue down their spine which protects them from fly and tick. The majority of them are in good fettle - they were so calm in the fank, just standing and looking as if they were sharing confidences. The main hill gather will take place next week weather permitting! 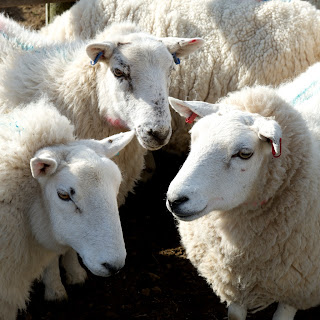 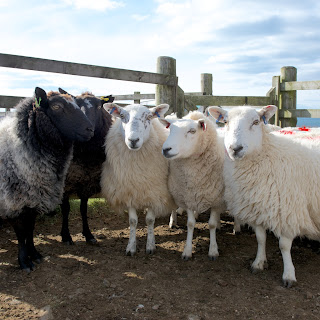 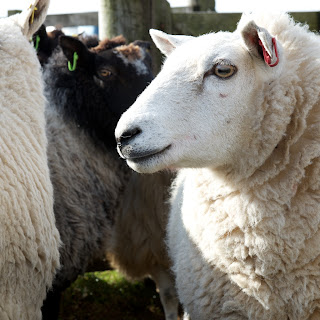 I went out for an evening in Tobermory in the middle of the week.  We had supper at Cafe Fish (delicious) and then went to see Tommy Smith Quartet play at An Tobar (excellent). 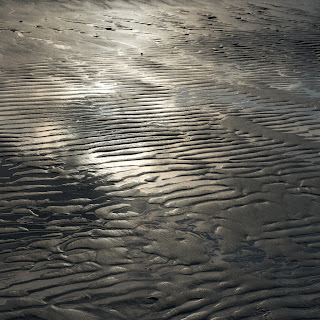 There are still a couple of cows to calve.  We had one last year who held on for weeks after all the others, and hopefully that is what this lot are doing! They are keeping the bull company.

As I write the wind has stepped up a gear. I think I will stop just in case the power goes off and I lose all this!

He needs a new name


The week has been another fairly spectacular one.  Monday was particularly fine as you can see from these photographs.

We have been busy with the pre-season preparations and finishing off projects.  I think next winter we might take it a little more easily - less projects...!  It has been one thing after another this winter - a lot of very positive improvements with the occasional last minute hiccup but they are all challenges we have overcome - although the final straw was at 4pm this afternoon finding we had a leaking radiator in the office! The words 'it never stops' ringing in my ears.

Farmer was delighted to get all the dung spreading done in the good weather.  He is now beginning to plan for lambing which starts in 4 weeks time. A gather and pre lambing wormer treatment are being organised for next week.

The new bull has arrived. He needs a new name. 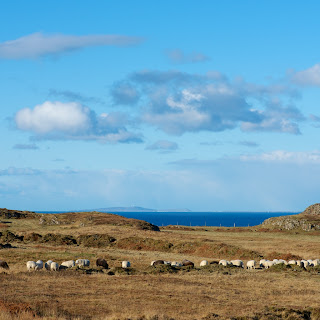 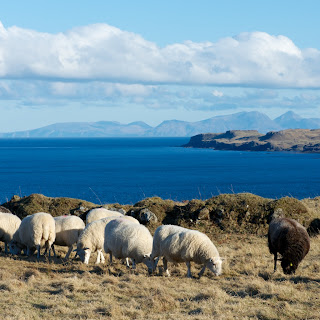 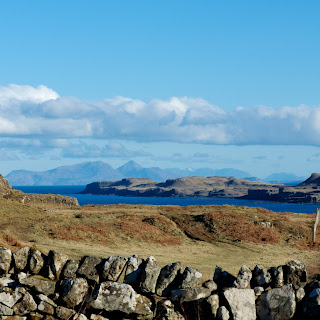 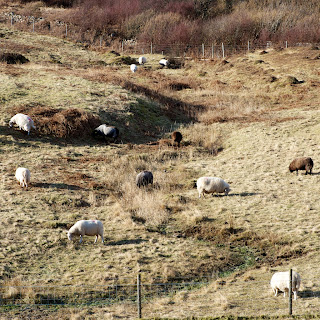 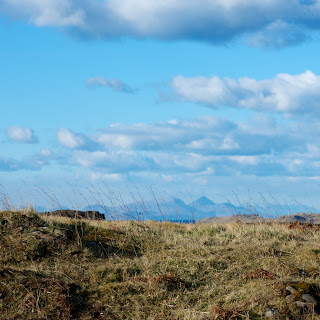 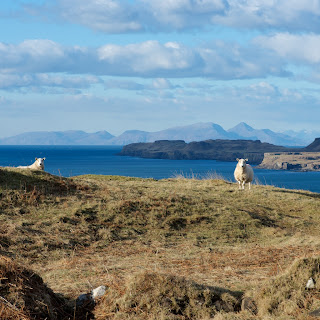 There are lots of in bye sheep photographs in this posting - a reflection of the number of journeys along the track through the Black Park to Haunn to see how Toechtamhor is getting on. Paint is being applied and I am hugely relieved the bath is back in place! It is very close to being finished.

Daughter called Brownie, having not seen him up close for a while. It was quite touching the way he ran across and came in close for a stroke. 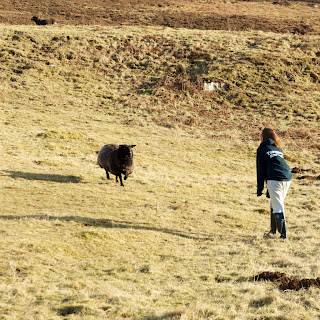 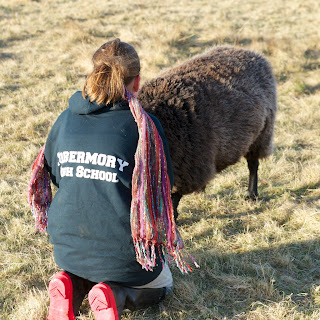 The larches in the Langamull woodland are just about to burst.  The sweetest of green buds gradually opening. 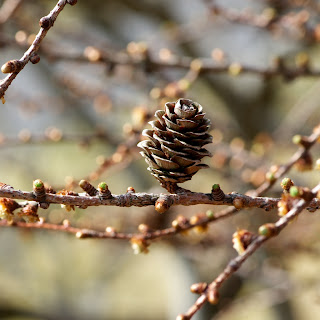 Not just us with the paint brushes out. The Council have been at it too. 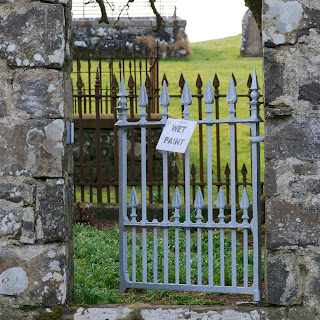 Lovely and calm in Tobermory earlier in the week. 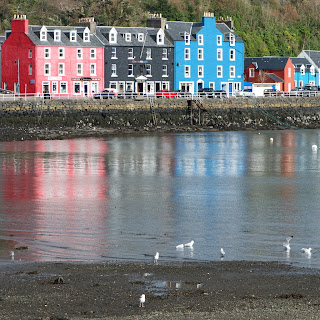 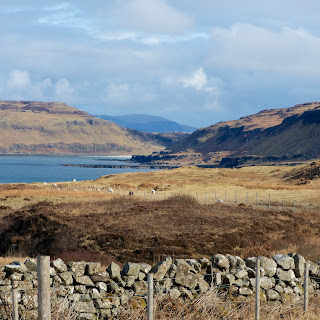 The second bedroom in Toechtamhor, dust sheeted and ready for paint. We are using Newlife Paints this time, they are made from recycled paints and have impressive eco credentials.  It wasn't possible for them to send me tester pots in the post and a delivery was going to cost £44, but instead they sent A4 sheets of paper with the colours painted on them. I chose from that, and I think I have made the right choice! The new energy saving heaters for the living room have arrived in Tobermory and will be connected up next week. 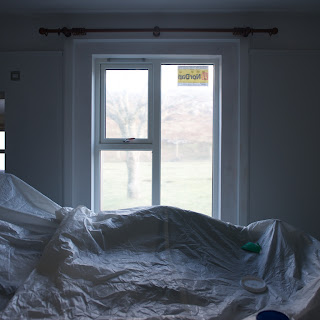 Over the wall beside Shieling.  The season starts in earnest for Shieling as it is booked through now.  Looking very smart too with its new front door! 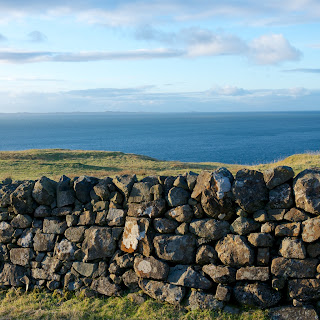 Not many photographs of myself on the blog so here you are with my lovely hens. A shadowy self portrait! 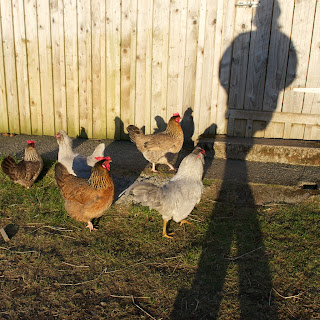 And on a trip to Oban.. via Loch Tuath, Ulva Ferry and Loch na Keal. 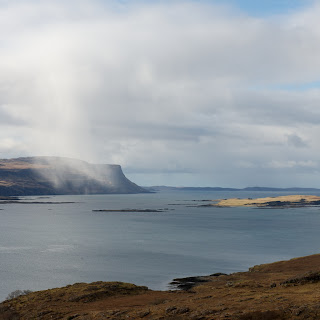 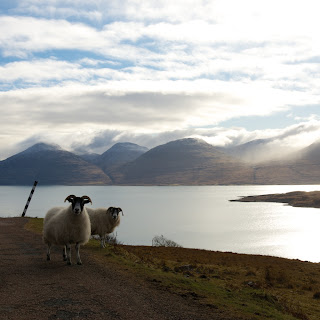 I haven't got a decent photograph of the new bull yet but I will get one over the weekend and include it in the next post.

As I have explained previously there is a risk of bringing BVD into the herd when you import new animals onto the farm.  We were very lucky as we were not the only Mull farmers looking for an Aberdeen Angus bull and so we were able to take advantage of the other farmers offer to collect the two bulls from Stirling.  The changeover between livestock trailers was swift and they didnt come into contact with any other animals.  Farmer and Jamie went in Jamie's pick up and neighbour's livestock trailer (thank you both again) to collect our bull from the other farmer.  When he finally arrived here, he was unloaded and eating nuts and hay within seconds!!!  His full pedigree name is Black Outlaw so we definitely need to change that, as he needs to be calm and gentle - certainly not an Outlaw!  (Reminds me of the bull we had which liked to lick cars.. he had to go...)

This bottle of wine was given to us as a luck penny by the breeder we bought him from. Appropriately named! 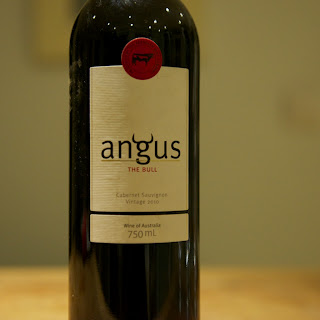 Farmer and Cap on the feeding rounds this morning. 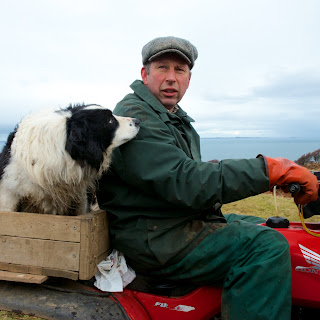 These girls were waiting for him to bring their nuts. 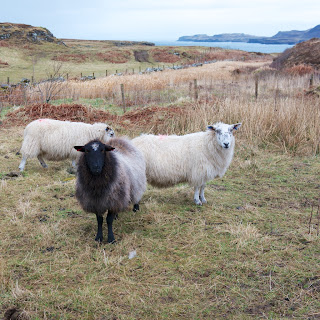 A Friday night sunset over Coll. 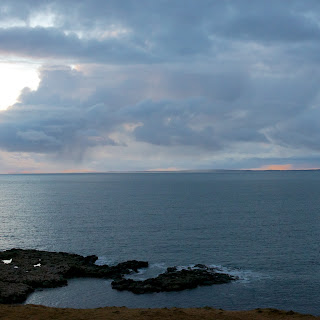