A week of contrast 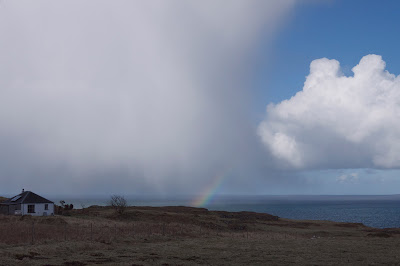 Farmer had the camera with him on Good Friday morning.  So here is the rainbow in front of Toechtamhor at cattle feeding time.  The kind of day when you can see the weather coming, and watch it going away again. 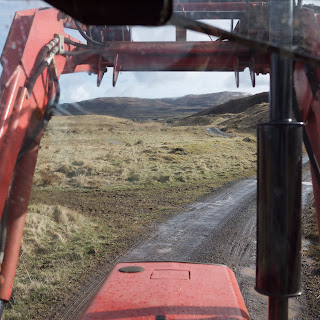 And this is the view from the tractor on the way home from Haunn.
Good Friday.  It feels like the season has really begun now.  Warmth in the air and the great sunset we had reminded me of showing in the guests at Haunn one Easter 10 or so years ago, when those cottages were still off grid, powered by LPG.  The pre-season rush of getting everything ready, finished just in time (phew), bit of a panic.  Everyone had arrived.  We welcomed them in as their children were playing in the gardens near the cottages, letting off steam from long car journeys in Easter traffic.  Walking home to Treshnish afterwards, warm sun, evening light, when a skein of snow geese flew overhead, and landed in the grassy field beyond us.  It was a magical moment. The snow geese (see Prasad's blog) stayed and nested that year but gradually the numbers became fewer until they stopped coming. 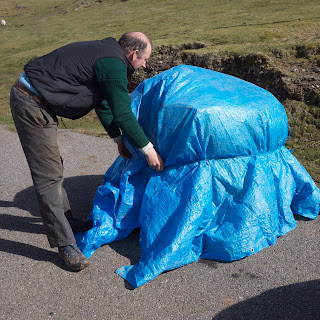 We received an order of food for the sheep yesterday.  Ewen Stewart delivered it to Ensay, the neighbouring farm, as he was going there anyway.  Farmer decided to cover it to avoid any 'self service' before he could store it in the feed store. 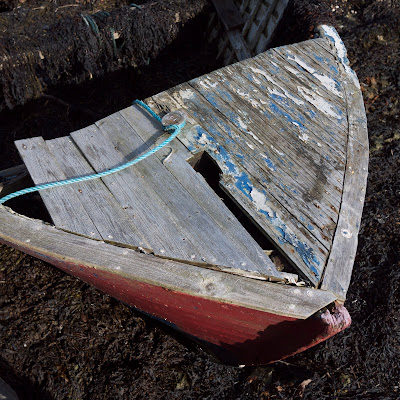 I had the camera with me later on.  A trip to Tobermory on Good Friday afternoon, having first visited the  new craft shop at Glenfgrom - Castle Crafts - full of lots of locally produced crafts.   The main street was busy with shoppers and visitors and the sky was blue.  The paint on this boat has seen better days, but the seaweed was enjoying it.
. 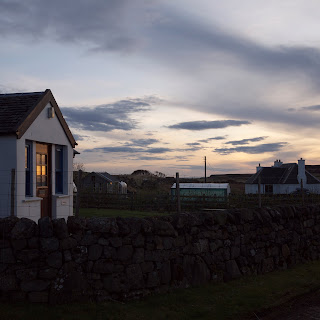 The light on Shieling door often reflects the light over the sea at sunset.  For another photo of sunsets on Shieling, look at the Almost Daily Photo.
Posted by Treshnish at 3.4.10