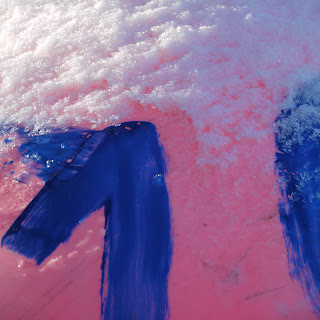 After a big storm a couple of winters ago, we found a buoy washed up on the rocky beach where the Ensay Burn meets the sea, which had the words Dragon Lady painted on it.  This was not the name of any local boat that we knew of.   It joined the growing collection of buoys and we occasionally wondered where it had come from. 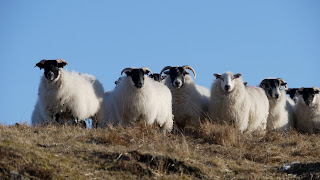 Farmer had to rescue a ewe this afternoon, which was 'trapped' on a ledge on the cliffs near Port Haunn,  15 or so minutes walk from the Haunn Cottages.  Sometimes they end up on precarious ledges because they have grazed there, enticed by nibbles of sheltered grass, at the same time not noticing where they have got to, and once there, they don't realise they can get down by themselves.  Sometimes they take a leap into the unknown when they see a strange dog on their patch.

Luckily for us all, this ewe did manage to get down safely.  The sight of Farmer and his Dog and the accompanying threat of being handled by Farmer (turned Rock Climber or the sheep version of a Cowboy complete with lasso) was enough - in a flash, she jumped onto a lower ledge, down onto an even lower one, and then onto a steep grassy slope and away.   So Farmer did not need to use his lasso this time after all. 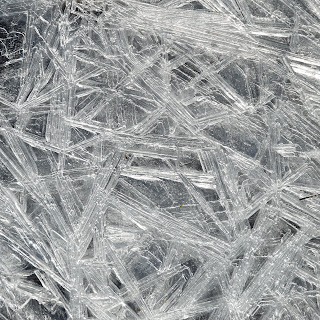 It had been a bit quiet in the calving shed.  No calves for quite a while despite late night and early morning vigils.  And then this morning two cows gave birth within minutes of each other.  Both calves and mums doing well after a quiet day in the cattle shed in pens on their own.

We ordered some native trees today from a tree nursery outside Oban.  The prolonged cold spell over the last 6 or 7 weeks has meant that they have been unable to lift any trees all that time. The burn next to our house has these amazing ice crystals on it now.

Some time later, we did find out that the Dragon Lady belongs to one of the skippers filmed in the 'Deadliest Catch' and that they had lost hundreds of creels (and their buoys) in a big storm, worth thousands of dollars.  Had this bright pink buoy burst its rope in that storm, crossed the Atlantic and washed up here on the island of Mull on our home beach at the end of Calgary Bay?
Posted by Treshnish at 2.3.10