Today I was getting ready to go away for a few days leaving Farmer and Daughter behind.  I had the timing all carefully planned.  I knew what chores I had to finish, including finishing Duill and Shieling for guests arriving while I was away.  Those of you who regularly follow the blog will know that I obsessively record a photograph a day on Blipfoto and I even had the emergency, just in case, photograph to publish before I left home.

Then Farmer rushed in to tell me that 'the feet were out'.  Up in the cattle shed another calf was being born.

There had already been one born this morning, and Farmer was up in the cattle shed penning mother and calf off so that they could bond without disturbance, when the second cow started.

I grabbed my camera and jumped on the quad with him.  It was a dark and damp day outside as well as being wintery cold.  We didn't speak as we went into the shed. The cows are not that used to me being around so I was not going to make my presence any more obvious.

The cows were quietly standing, as if waiting.  It was quiet in the shed, apart from the lowing of the new mother to her calf, and his bleating replies.

Cows will naturally go off to be on their own to calve outside, and so in the cattle shed, they find the most private corner to go.  In this instance, in the shelter of the shed, the cow was behind a dividing wall.  She was lying on her side, jet black head lying on the straw as if sleeping; her body prone, still.  The two feet showing, covered in the mucus of the sac which made them look yellow.  She gave out deep pushing groans and the feet twitched. It was very slow.  Was she just taking her time, or was she in need of help. The rest of the herd stand, stock still, waiting.

The calf is finally out, lying on the straw, wrapped in the sac that has protected it throughout its time in the womb, but which now needs to be cleared away from its face, mouth and nose.  Farmer gets a piece of straw and pricks a hole in the sac round its nostrils so he can breathe, whilst the cow stands, and begins to clean the body.  Interestingly she doesnt go to the head first, but she licks and pulls the sac away from the body, making deep mooing noises which the calf recognises. Each rough lick of her tongue seems to massage him into jerking movements, as if trying to gather the energy to be more alive.  Another rasping lick and he lifts his wet mucussy head towards her as she moves towards him. The first recognition.

All around the cows are still quiet but start to move in to look.  Farmer keeps them at bay, realising mother and calf need more time. We move away too.  He will go back and watch to see him drink later on.  I will head to Glasgow and my little adventure. 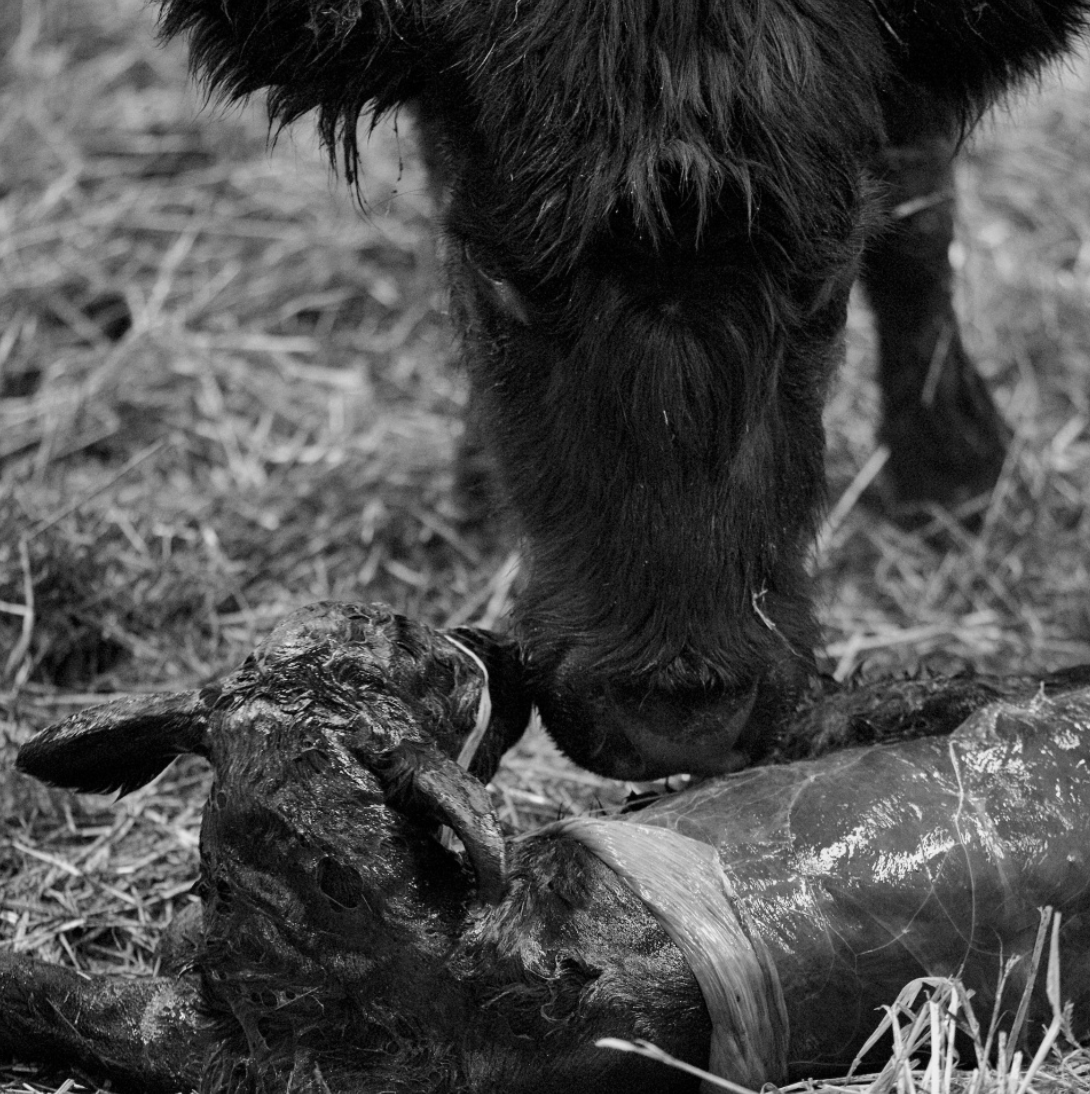