Possibly the biggest excitement of the week has been Prasad's photographs of the chough that he and others have been seeing over on the other side of the headland.

The weather has been cold, crisp and clear over the last week or so. The ground is frozen and I have been enjoying walking across the bogs. I love the way the frost picks out the shapes of the mosses and the way the low sunlight picks the detail out.  A good photographic challenge. 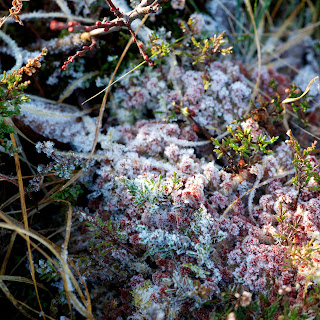 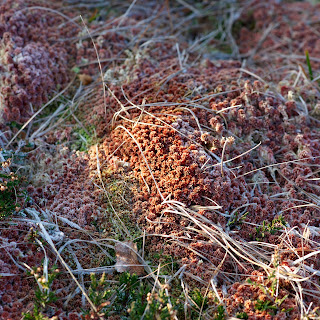 I was quite surprised to find a thistle looking as if it was about to flower, given that it is December. I will keep watching it now to see what it does. 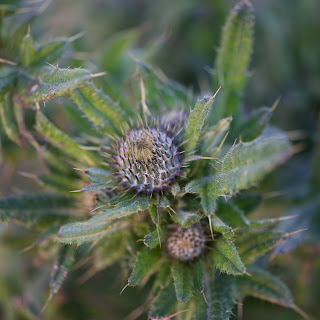 Farmer put the 'chaser' Tups out on Saturday while Daughter and I were away.  The premier team of tups were 'put out' 3 weeks ago, and the idea is that these chasers will catch the ewes that the first lot might have missed.  The blackface ewes are still on the Point, but there is plenty of grass and they are doing a very good job in eating the 'foggage' down. 'The Point' is a mixed habitat having some good areas of coastal heath, and pockets of herb rich grass, it isn't in our 'scheme' which means we can be flexible with when we graze it - an insurance policy for times when we are short of grazing, perhaps due to a cold late start in the spring or extra long dry spells (yes, really) both  inhibiting grass growth. Farmer deliberately leaves the Point for tupping knowing that there will be more than enough for the ewes to eat, and more than enough ewes to take the grass down to the level that we need for the flora and fauna. 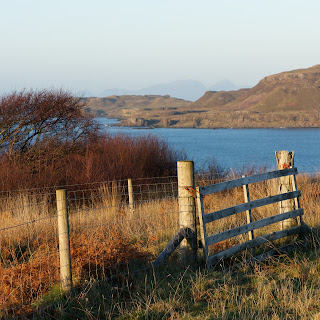 This gate leads from the field which surrounds Shian and Duill into the boggy new woodland area.   The thin shrubby plants in the foreground of the photograph below is the evidence the natural regeneration is working, and it is really good to see.  Our aim to create a wildlife corridor across the in-bye connecting the small areas of woodland to each other - it doesn't happen overnight! 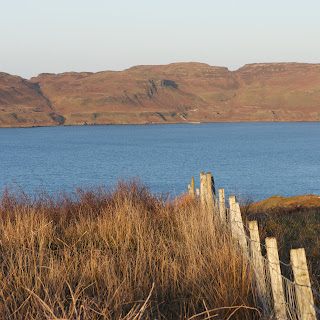 Calgary Bay and the pier just showing up in the distance.

The cows are grazing in the Black Park at the moment, and are being fed some 'cake' every morning.  As long as it is dry, we are quite happy to keep them outside, but if it turns wet we will bring them in so that we minimise the damage they make to the fields in wet weather.

James has been doing some road works with the digger, creating better access for tractor onto the Point so that Farmer can cut the bracken up on the flats where 50 years ago they grew wonderful crops of oats.  We won't start ploughing it up, but it will be good to get the grazing back.  There are lots of 6 spot Burnet Moths in that area in the summer.

With this steady spell of clear skies during the day, we have enjoyed some fantastic clear night skies at night too.  One very bright planet reflecting on the sea in the same way the moon leaves a path on the water.  Stunning! 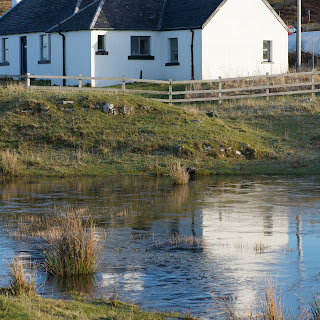 Near Shian and Duill there is a small lochan, and today it was frozen over. Gary the electrician is working in Duill just now putting LEDs in the bathroom and a fantastic almost silent bathroom fan.  Neil is working at Haunn with lots of paint pots whilst Angus and Ben try and squeeze a new window into the gallery bedroom in Studio! The insulation makes the place feel so cosy already - and the wood burning stove arrives next week.

While we were away at the weekend, I went to look at some furniture for the cottages, that I had initially seen on Ebay and then found the seller's website on google. It was all a bit cloak and dagger as I was given a mobile number but not an address, so going against everything I am teaching my daughter about internet safety, off I set - into the sunset (literally - see below) and I was guided to the farm step by step.  (I had surmised that they are not really a 'showroom' and possibly that the farmer they lease the building from frowns upon visits from the public!) Anyway, I turned into a tarmac drive (Farmer would like one of these) with neatly mown verges (no wild flowers then) and drew up to 3 huge towering farm buildings.  My armchairs were lurking in the middle one, through steel doors into a cavernous shed, stacked high with salesroom buys. It was a successful foray into unknown territory as I bought bedroom chairs for Studio and Toechtamhor, and a lovely faded  Victorian mahogany bedside cabinet for West!  Plus they are being delivered to Oban! 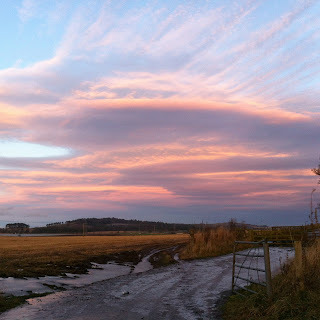 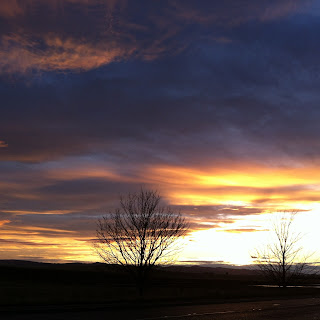 I have been keeping an eye on the turbines and how they are working.  It is unnerving when you see the new one not turning, when the older one is. So I wanted to see how they perform in relation to each other.  There is no risk of me turning into too much of a geek with this as I clearly have alot to learn regarding record keeping!  In the last 2 weeks it looks as if Turbine 2 has made 30% more electricity than Turbine 1.. which leads me to doubt that I actually took the meter readings on the same day - so I am going to start again!

This is the field where we fenced off an area of boggier ground to see if natural regeneration will occur from the birch and hazel woodland below.  It is rewarding to see it is working and that the existing woodland edge is spreading. 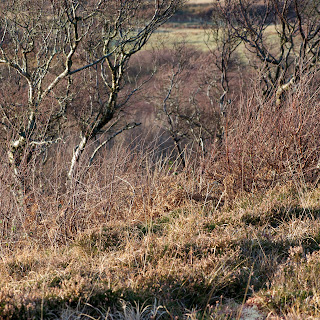 A robin was enjoying the self seeded young birches, almost matching its red breast. I was excited to see my first Great Spotted Woodpecker today in the trees around the house. I have seen them elsewhere but never here!  Alot of fast and furious pecking in the sycamores. 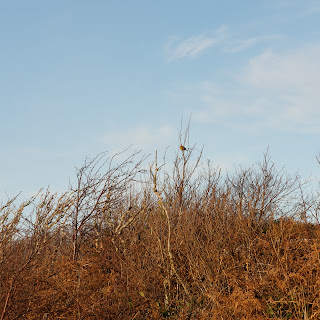 The zwartble hoggs are looking good. They seem to be thriving in this cold weather.  We have Guy putting in a new fence in the Park which will help hugely at gathering time, and give Farmer more flexibility and control on grazing. 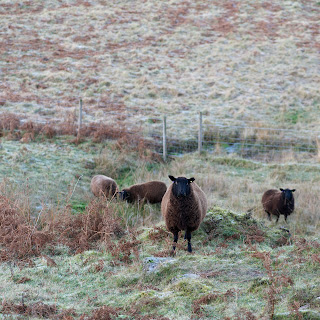 Coco the puppy seems a bit better than she was last week, and was merrily destroying Christmas decorations and Santa hats this evening as we got the boxes down from the loft and pulled out all those old familiar decorations to dress the tree. 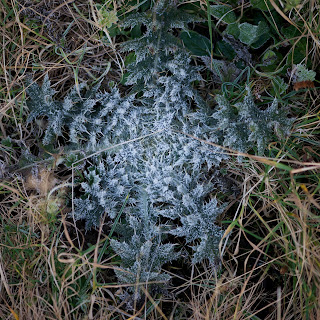 We have been seeing alot of the vet recently - a couple of weeks ago, Farmer had a meeting with The Vet to write his Animal Health Plan, which every farmer has to do in conjunction with a vet;  last Wednesday Coco had a blood test taken by The Soon To Be New Vet as we continue to try and work out what is wrong with her, and then on Monday just passed, The Vet came over to Treshnish with Soon to be New Vet to do the routine BVD testing that all herds in Scotland have to have done by February 1st. I dont know when we will hear the BVD blood test results but Coco's came back showing she was in need of some Vitamin B12!  So we will be off back to the vet for her to have an injection next week.

We had an interesting visit a few days ago, from a couple who had lived and worked at Treshnish in the early 1970's.  They knocked on the door just as I was pulling on my wellies and going out somewhere.  Off they went for a walk down to Haunn, but came back the next day for tea. It was fascinating to hear what it was like when they were here. It was also lovely for us to hear their impressions of how things are now!  They lived in Shian, and it was his first farming job.  He worked with Tommy and Colin, and together they looked after 30 cows and about 300 sheep.  There was a manager from Dervaig who would come in to see how they were getting on every now and then! They made silage with the tractor (Massey 35) we bought with the farm in 1994, using the silage pits you can still see in the Haunn field and down below the house.  East, Middle and West were rented out as holiday cottages then, and she looked after that side of things.  There was no mains electricity, though the diesel generators were replaced finally with mains electricity while they were living here.  He talked about what we knew as 'Tommy's shed', long since renovated into an office.  By all accounts, many a dram had been taken in Tommy's shed after working in the fank, and many a story told! 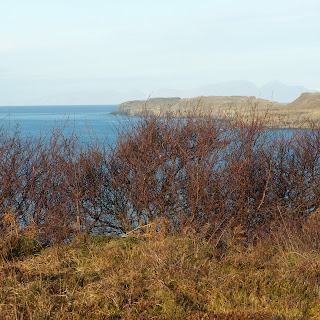 Looking over the tree tops to Caliach Point and the faint mountains of Rum behind.
Posted by Treshnish at 12.12.12