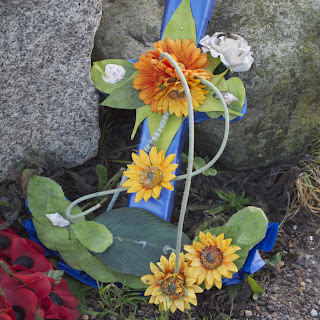 Not much news from the farmhouse tonight.
All week has been taken up with school closures. We do have a petition online and it would be great if you felt like signing it. http://www.PetitionOnline.com/ulva4111/petition.html
I will write again soon. In the meantime here is a letter I sent to the Oban Times this week.
On Thursday 28th October, pupils at Ulva School were awarded a Green Flag for their achievements as an Eco School. The next evening they held a Halloween Party - the small school packed with family, neighbours and folk from the Ulva area.
In September, 3 of the older pupils sang in Gaelic at the Mod in Tobermory - winning 2 Seconds and a First in the Solos, as well as performing as a group and getting a Second.
At the Harvest Service on Ulva, the same 3 children sang (and played recorder and violin) to a packed church.
In the spring they performed in a play at the Mull Drama Festival and won 2 prizes.
As they do every year they sang to a packed church in the Easter Service on Ulva.
During the summer term, as in previous years, the children grew their own vegetables in the playground. Before half term they harvested those vegetables, baked bread and made bramble and apple jelly from brambles they had picked near the school.
The children are integrated with their local community and have a strong sense of place and belonging - as illustrated by their contribution to a National Library of Scotland project producing a state of the art Mediascape presentation for visitors to the island of Ulva.

These are some of their day to day achievements and as well as all this, the children succeed at their school work, easily keeping up with learning targets. These children are confident individuals, with a strong sense of responsibility for their fellow pupils and their environment and they contribute an enormous amount to their community - in short, they EMBODY the Curriculum of Excellence.

On Tuesday 26th October, the parents of the children received a letter from the Council telling them of their proposal to close this wonderful school.
Posted by Treshnish at 5.11.10