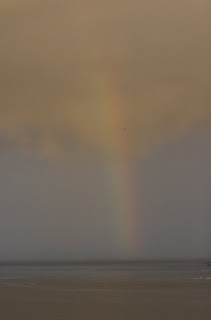 This was the view from our window this morning. And the soft changing light, reminiscent of Jon Schueller skyscapes on and off throughout the day. Later on today, we watched a pair of golden eagles over Shian and Duill, two of our holiday cottages, as the sun was beginning to set, which was quite a magical sight. To say the least. 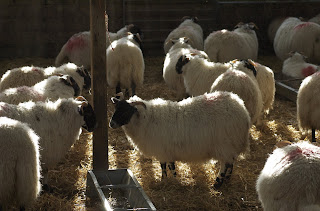 We had 8 organic Aberdeen Angus calves to sell this autumn and yesterday they were sold. The remaining 4 heifers are going to be replacement breeding stock when they are old enough. We are at a disadvantage only having a few to sell as 8 is not a full lorry load but this year we arranged with another organic farmer near Oban to sell to the same farm so we could share the lorry and this seemed to work well for everyone.
So the calves gone, it is time to get this years hoggs (female lambs) onto food. It came as a surprise to me when we first started farming sheep, that tucking in was not an automatic response when a trough of nice sweet smelling 'nuts' is placed in front of them. Far from it! It can be an up hill struggle! But after years of learning through our own mistakes the Farmer put out yards and yards of troughs into half of the cattle shed and a couple of bales of hay. It is the blackface hoggs' turn to go first. One or two get the hang of it fairly quickly, and then it is a question of copy cat until they have all learned that they can actually eat that stuff, not just stand on it - or worse. They all seemed very contented yesterday but they are a little skittish when the lights go out after Farmer checks them last thing at night.
And later on, one of this years new young cockerels enjoying the afternoon sunshine. 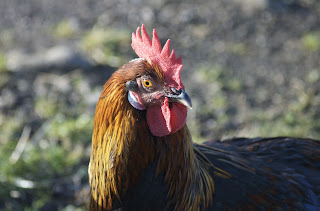